The second continuation of the Festival of Social Innovations, which completed a succesfull realization of the People to People pilot project, lead by the British Council in the Czech Republic, Hungary and Slovakia and funded by the UK Foreign and Commonwealth Office (FCO), was held in Banská Bystrica on 24 June 2019. The beginning of the program was dedicated to a panel discussion, where Arnold Ponesz from EPIC, Martin Krištof from Truc sphérique o.z. and Juraj Hipš, the founder and current associate of Živica, discussed the connection between themes of social innovation, community arts and critical thinking. Britain’s guests on the topics, Matt Little of the Real Ideas Organization and Selina Busby of the Royal Central Schoold of Speech and Drama also took part in the debate, bringing other insights into these topics and conveying the perception of these topics in the UK.

Presentations in the Pecha Kucha format, which followed after the discussion, provided inspirational examples of good practices in Banská Bystrica and Prešov regions. Among the presenters, for example, Lenka Theodoulides from Matej Bel University in Banská Bystrica, introduced a project where students will be able to establish their own social enterprise, Ivana Ivanová from the Slovak Debate Association presented concepts of critical thinking or Milan Zvada from the Garden – Center of Independent Culture in Banská Bystrica introduced the story of their cultural and community center. We have been also honoured to welcome Ján Lunter, the head of the Banská Bystrica self-governing region and Branislav Ondruš, secretary of the Ministry of Labor, Social Affairs and Family, who addressed their views on the topics.

Practical and inspiring workshops from all areas were led by long-time experts who also opened up space for interesting discussions. Michal Smetanka and Matt Little led a workshop focused on social innovation, Tina Gažovičová showed the participants practical examples of the role of critical thinking, and Selina Busby presented her experience in the field of community arts. A great closing to the program was given by Michal Smetanka with his masterful performance on several interesting traditional instruments from around the world, to which he also added interesting interpretations of the songs and the role of the particular instruments in them. 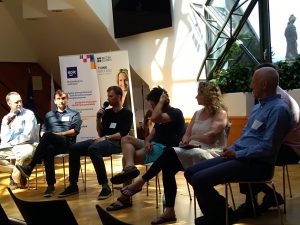 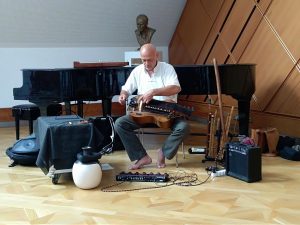